As alluded to in my last post on the quattro topic, I also have a Mk1 Golf thats undergone a bit of a transformation over the last 30 years of ownership.

Its basically sat unfinished outside under a car cover for about 12 years after being in the ballpark for being finished, but for reasons I cannot understand I just never got around to actually getting it done and roadworthy, probably money and probably a tad laziness on my part if Im truly being honest have contributed to me being remiss, also I had the quattro to do so the poor little golf got shelved.
Over the years many have attempted to acquire it, either for scrap or for parts, Im glad I never succumbed to the temptation to get rid of it.

Well anyway, I decided to move it over some months ago, and one thing led to another, free off the brakes, get under the bonnet, vacuum out the cat hairs ( a moggy had used it for a home it appears), wash it off and inspect it etc.
Thats kick started me into getting the parts it required to get it road legal.
The first thing I did was insure it, even though it wasnt usable, so after a few weeks of working on it Id gotten a new exhaust for it, had to modify it as it didnt fit correctly and make a new downpipe because this golf is turbocharged on an 8 valve gti engine.
The motors been modified by yours truly some 20 odd years ago and although it ran fairly well it never quite ran properly.
The turbo is a garret hybrid with I believe what Turbo Technics stated a T3 special build, with 0.48 turbine housing and
and 55mm compressor plus a 360 degree bearing.
We stated at the time it needed to be capable of approx 300bhp, im not so au fait with all the turbo terminology so if anyone knows what this combination could support then Im all ears.
Further work on the internals are a set of MB code quattro pistons and a Cr of 8,8:1 as per that engines stock setup.

The 8 valve golf motors basically the 5 cylinder version with a cylinder lopped off, has the same cylinder head layout ( non crossflow) and valve sizes and the same sized combustion chamber and shape.
The conrods were changed to a set from Arrow in Coventry, just because they were significantly lighter and stronger than stock.

The gearbox has a quaife torque biasing differential to tame any tendency to wheelspin.
Brakes and suspension were all altered many years ago and brand new parts used but its all for nought if its not roadworthy, hence a particular bee in my bonnet to see it usable.

After replacing the 24 year old unused cam belt ( still appeared in perfect condition) and finally get the g60 supercharged cam dialled in correctly I got it running, but it wouldnt start and run properly, ran very very rich and was just plain nasty.
Part of the issue was the injectors which were undersized but most of the issue was a wiring fault, present in the original diagram I used to get the digifant 1 corrado g60 ecu to run the engine.
After fixing that it appeared to run well, for a while, then reverted to rich and unstable idle black smoke etc.
Some head scratching later on and I worked out why.
The digifant 1 system will go super rich to protect the engine in the event of fault codes being stored.
After wiping them it ran flawlessly.

With the running issues now sorted out I could take it for a little run, its first self powered run in 24 years to be precise.
A short run to the roundabout and back appeared to be the order of the day, just in case of problems.
Found some rattles, and exhaust knocking and a few minor gremlins, but after getting it warmed I gave it just a modicum of right foot to get the turbo spinning whilst watching the boost gauge.
I didnt dare go WOT as the injectors wouldnt keep up.
However it showed immediately that it was far more potent than it had ever been previously.
A pleasing whistle from the turbo, and a rush of torque saw about 4.5psi boost registered, no knocking or pinging though.
Seems to have at the moment a very nice power delivery and no squirming from the front end under acceleration.
Its since had several runs out just short stuff to warm it up etc.
The injectors have been changed for the stock items so its capable of approx 180 bhp on those without being too silly on boost, which went to 7 psi last time out.
The push in the back is pretty hard for such a small boost level so Ill see how it goes over the next few months as I fettle out any remaining issues.
I do need to install an electronic boost control valve to hold the wastegate shut until the desired boost level is touched, just to make the power delivery as savage as it can be as currently its piped directly to the manifold to allow boost to open the wastegate as soon as it makes it, not ideal but safer for the time being I think.
No point wasting boost pressure if itll pull harder for no real downside is where Im aiming for though.....

Heres a few photos of it, the first one was taken some years ago, so its not nearly as clean now as it was then. 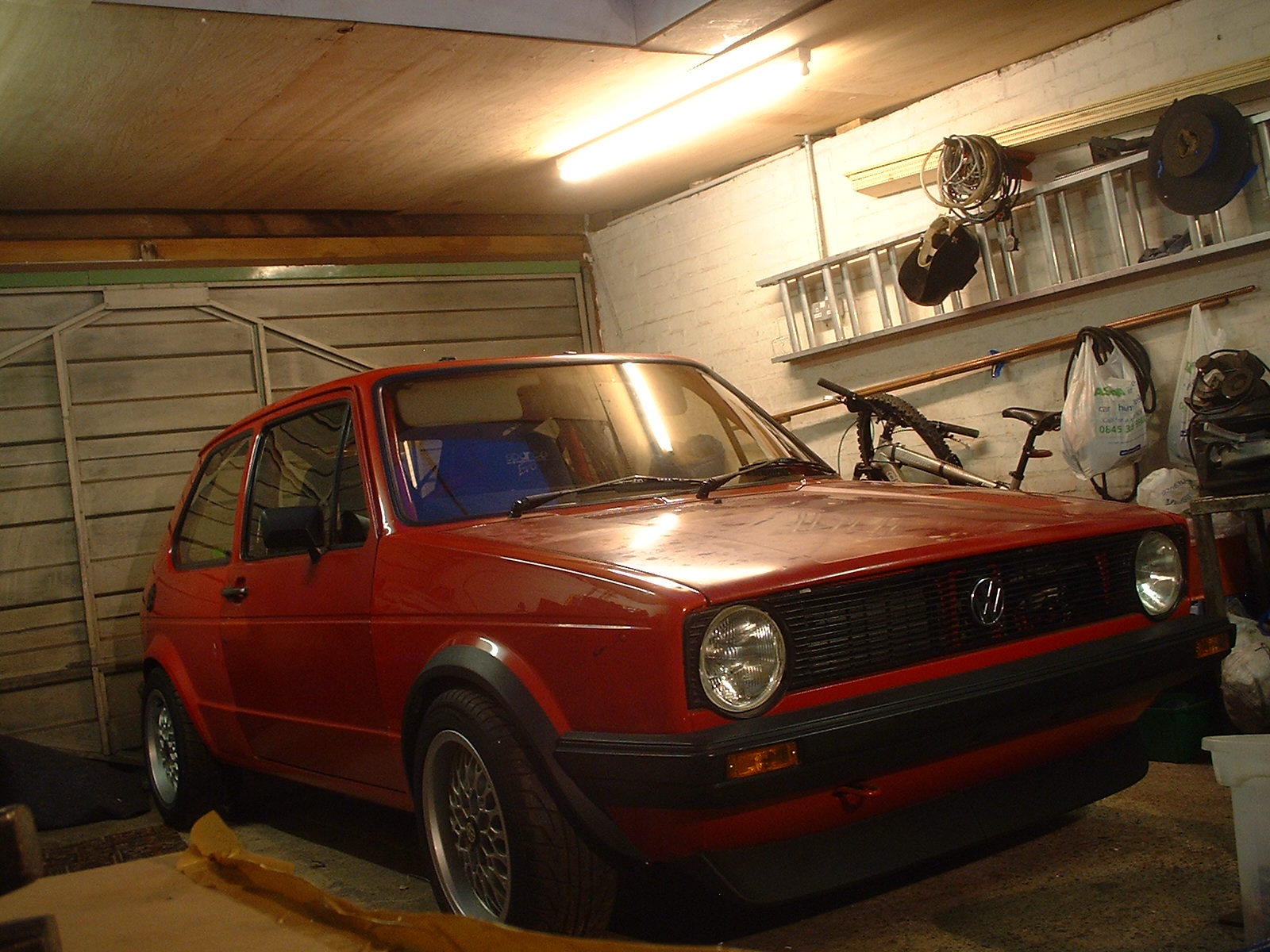 Not very tidy at the moment nor clean! 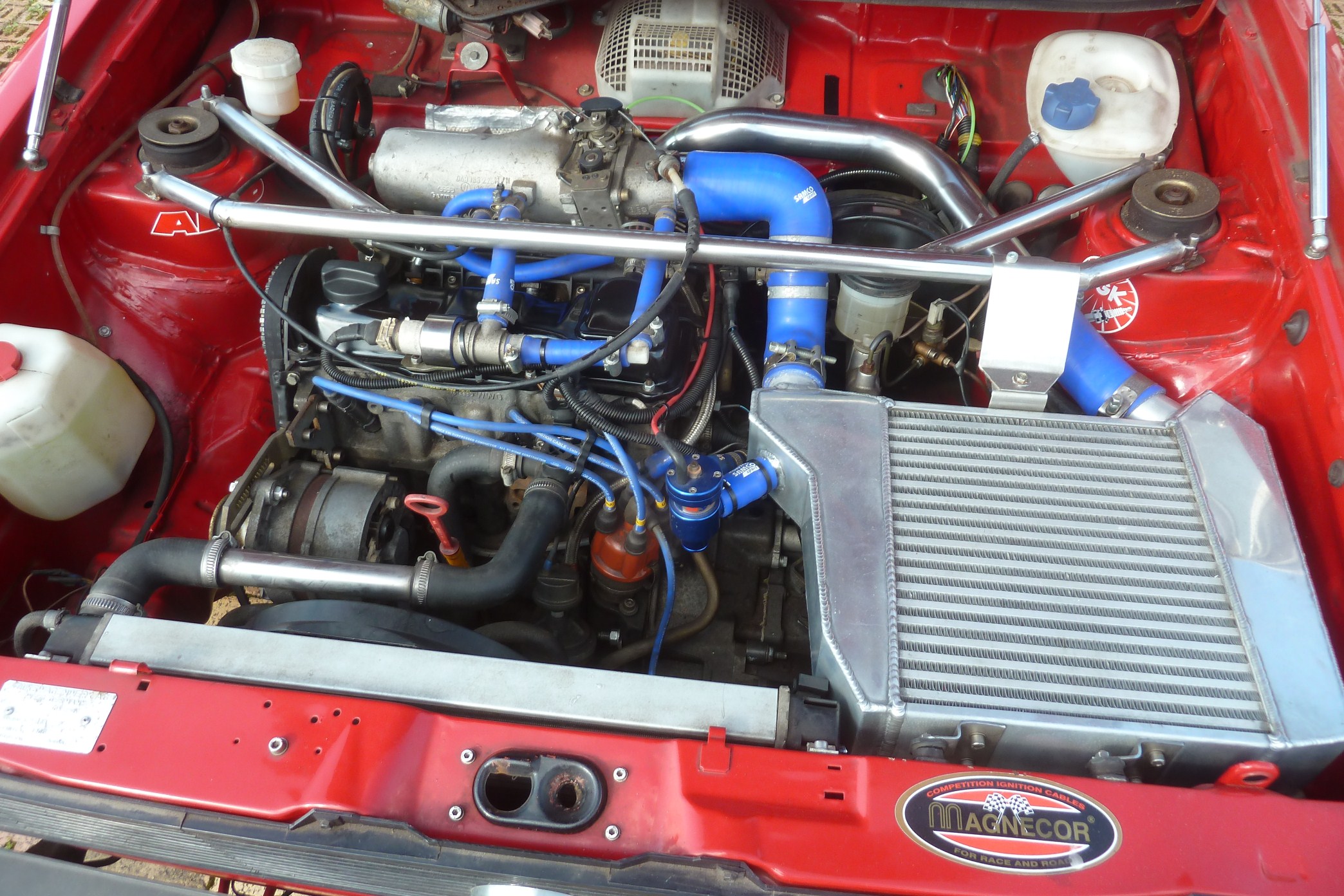 I pulled the audi out the garage just to take a side by side photo of them both.
The golf looks huge to me.

More to come when Ive fettled it a bit more and
Tony Warren. GC #96.
Top