I've been a member of the 306Gti6 forum for a few years now so some of you may know me or have seen my car. It was originally intended to be a fast road/trackday car, but inevitably the bug bit me and as the car became more focused and more acomplished on track I found myself wanting more performance, better braking, more grip etc etc. Things were developing nicely until I ran a big end bearing at a Castle Coombe Action Day last september. I was pretty down about the whole affair but plans for a straight swap with another used engine were soon shelved in favour of a complete 'ground up' rebuild with a new block and crank, forged rods, high comp pistons and some head work. GC are taking care of the head as I write this and I and a few knowledgeable friends have taken care of the bottom end rebuild. Along the way I have learned valuable lessons, chiefly a very important one about safe oil temperatures and the stupidity of using inferior grades of engine oil, looks like I was pushing my luck for quite some time before I destroyed my engine, so hopefully the new one will avoid a similar fate!

That little lot has taken me a while to save for, and it's still got a long way to go, but once it's all together it seems a little bit of a waste to just do the occasional trackday and after watching a friend compete recently in the Dunlop Motorsport News (DMN) championship, I'd like to get the car ready for competiton so I'll keep the page regularly updated with the progress. There is no chance of it bieng ready this season, but I'f I can get it done through the summer and get my ARDS test out of the way then a few rounds next year should be a strong possibility.

A look at the result of 'saving money' on oil...

Heres some of the damage to the crank... 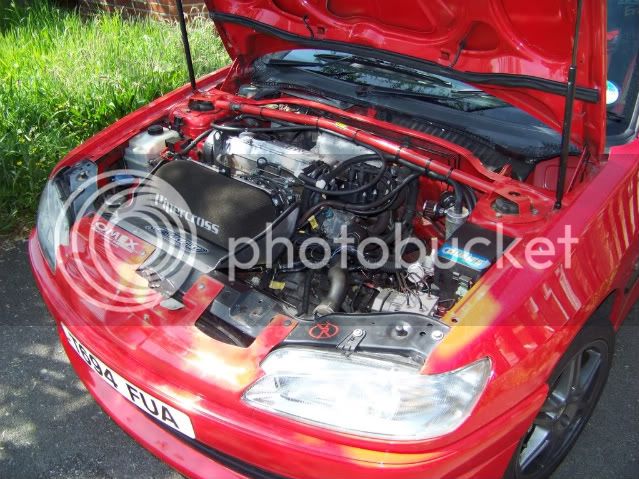 This was taken seconds before two of my big end shells decided they would be better off stacked one on top of another...

This brought me to my current stage, faced with the prospect of building a new engine from scratch I decided I had better find out a little about whats involved...

Very good reads both of those. Lots of handy pictures for people like me. And with the lessons learned from reading and chatting to peole that know things, I set about building my first (And quite possibly last) engine. Owing to the fact I am petrified I'll have missed some vital measurement, I have done my best to check, everything.

With the block completed, I turned my attention to the head, I'm told these don't need much porting work as the throats are pretty big already, but there are some gains to be had, so I tidyed up all the casting marks and did my best to remove all of the sand cast surface finish from the ports. Once I had collected enough propper parts to finish the head, it was off to GC for some professional fettling...

I know the box is probably a little overkill, and writing 'Fragile' on the side issues a challenge to the transportation network, but I wanted it to get there and back safely.

One of the interior, not much to see really at the moment other than the cage...

And my latest aquisition, I'm looking forward to wiring that up.

Buretting the block to get the figures to use for calculating the CR, this gave me a headache, thanks for your help over the phone Mr. Croft

so that's what a Peugeot 306 Rallye looks like Jim! A nice one anyway...

Peugeot - great boys for numbers they were..

Thanks Guy, when it's clean and the sun is out, it looks quite respectable. It's quietly festering in our yard at the moment though awaiting the arival of the summer and a fresh burst of enthusiam.
GC Book # 103
Top

The book by Rick Vogelein is great! I read it 20 years ago - I don't mind a 'plug' for him!
The parts were most beautifully packed - I was so impressed when they arrived here. I have to say that Jim did a smshing 'DIY' porting job on this head, my work was some corrective work really.
JD Peugeot ready for guides (1).JPG (106.91 KiB) Viewed 10952 times I'm planning to beaurette the cylinder tonight or tomorrow so the CR can be finalised. I did enjoy Rick's book, it does concentrate heavily on V8 engines, but a lot of the advice and tips tranfer well enough to a four cylinder application. Thank you Guy for your kind words, and the head looks superb.
GC Book # 103
Top

To cut a long story short, I have'nt updated as work has been manic, so much so that in an effort to spped up the process of getting on track sooner, I have bought a complete rolling shell from a friend. I intend to fit the engine I'm building plus bigger brakes etc.

First thing was to sell the old car. Here she is, all stripped of the bits I wanted to keep...

On the advice of Mr Croft, in order to make maximum benefit from head mods and cam choice, I ordered up some beautiful tapered bodies. I intend to use the runners from a standard Gti6 plenum inlet , these will also provide handy locations for the inner set of injectors (i intend to run 8) and I will use the outer positions on the trumpets for the high flow injectors. The eagle eyed wil no doubt notice that I have injector bosses on the bodies themselves. These I intend to blank off with removable o'ringed bungs in case future class rules preclude the use of more than 4 injectors, in which case the injector position on the bodies themselves would be the ideal location.

Great car and a great effort!

Could you be a little more specific about the choices of oil that possibly led to engine failure?
Thanks,
Kostas
Kostas, Greece
Top

I can't take any credit for the car, all the work was done prior to my buying it, as for the causes of the engine failure, I suspect a number of reasons contributed to the eventual outcome.

Mainly (my fault entirely) running the car for a two week period on the base map that came with the bodies, this would've been very fuel rich and this is evidenced by the very fuelly smell in the sump on strip down. Obviously I realise now that this was a very silly thing to do, but we learn from our mistakes, at the time I knew very very little about engines, I certainly won't be repeating that error though.
Another issue is that I was running an oil cooler that was'nt big enough to keep my oil temps down, it was a 13 row Mocal unit but driven hard the oil temp would regularly reach 120 degrees, again, I now know this is a seriously excessive temperature at which to expect oil to retain any kind of film strength or pressure. The oil itself was a fully synthetic 15-40wt oil I purchased from Halfords, again, probably not the best choice of oil for an engine that gets used hard, but hindsight is a wonderful thing.

Fantastic rebuild so far, those Trumpets are by far the longest i've ever seen! it looks as your doing most of the fabrication yourself, the pictures are are credit to the story.

Mr Croft your wealth of knowledge continues to amaze me, is there a Cylinder head you have not fettled with....

Thankyou Simon, its proving a pleasure to build this engine as I can just take my time and get everything just so. I suppose it could've been thrown together months ago but I really want this one to be as 'right' as I can get it. I'm aiming for entry in to DMN Saloons (Dunlop Motorsport News) towards the end of the year and competition is fierce so I need to make sure the only thing holding back the car is me.

Fabrication wise, the cage fitted to the red 306 was supplied in kit form by Custom Cages, all I had to do was a little fettling to the pre-cut tube ends to make it fit nicely prior to TIG welding. In hindsight I would quite happily pay the reasonable fitting charge as I have come to the conclusion that cage welding is for contortionists/sado masochists, unfortunately I'm neither one of those.

The fab work on the white 306 had all been done prior to me recieving it. I did find one or two issues with it which were sorted out quickly and efficiently by the seller and I, as far as fab work goes all that remains is to fit a dash bar as I will feel a little safer knowing its there. (It will also help to tie down the front turret triangulation bars that run through the bulkhead)
Last edited by Daveyboy on March 21st, 2011, 11:16 pm, edited 3 times in total.
GC Book # 103
Top

These are the new wheels. 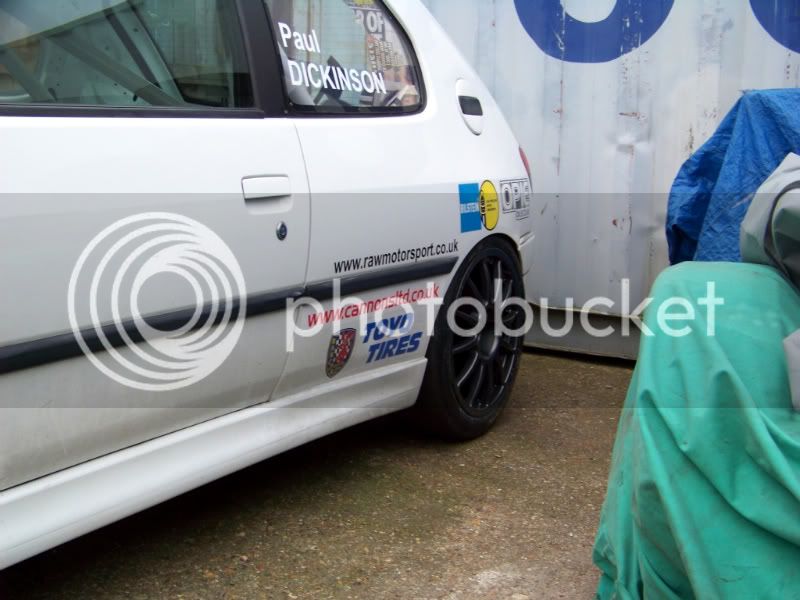 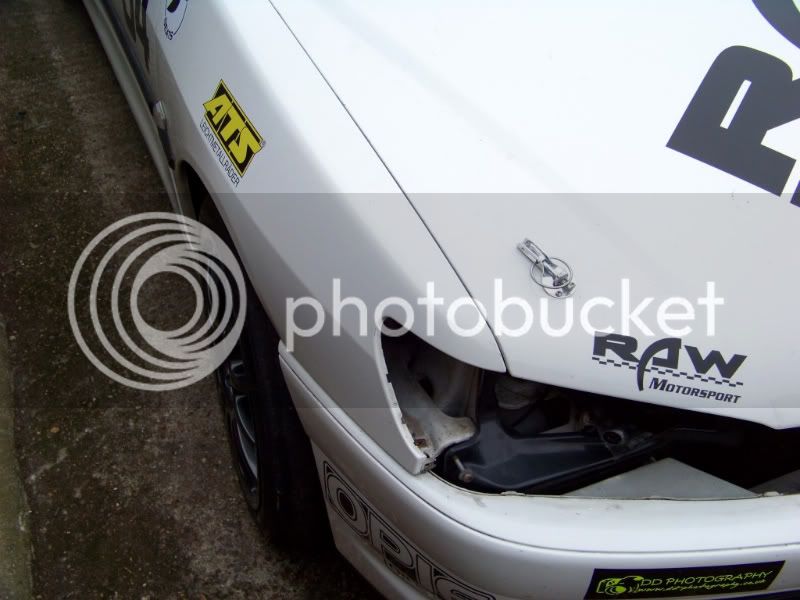 Do you get a hoody with it Jim?

Guy Croft wrote:Do you get a hoody with it Jim?

Yes, and a free baseball cap (which looks rather natty if you put it on backwards)
GC Book # 103
Top

Wheel choice or more importantly size was dictated by the availability of reasonably priced second hand slicks in 17" fitment, that and the fact I have 330mm rotors to squeeze in up front makes 17" wheels something of a necessity. The neon yellow sunstrip and mirrors are a trademark of the firm that produced the car, it certainly attracts attention and makes the car very easy to spot from the pit wall. I was in two minds at first but it's rapidly growing on me. The RAW motorsport logos will all be replaced in due course with my own company logo as it is an ideal opportunity to gain some high profile advertising especially as certain rounds of the DMN calendar are televised. Lets hope I don't let the side down by blowing up or spinning of right in front of a camera!
Last edited by Daveyboy on March 19th, 2011, 12:39 pm, edited 1 time in total.
GC Book # 103
Top
Post Reply
36 posts

Users browsing this forum: No registered users and 7 guests